Windsond was successfully used to learn more about the behavior of extreme wildfires. The group was led by Marc Castellnou. They made a field campaign in 2021 and their article was published in the Journal of Geophysical Research Atmospheres in November 2022. https://doi.org/10.1029/2022JD036920

As background, there is a global trend of more intense wildfires. Citing the paper: “The increase in extreme wildfires has had an impact on a global scale, resulting in dramatic consequences in terms of human lives: 173 deaths in Australia in 2009; 110 deaths between June and October 2017 in wildfires in Portugal; 102 deaths in Kineta, Greece, in 2018; 85 deaths in Santa Rosa, California, in 2017; 94 deaths in Paradise, California, in 2018.”

The extreme fires are less predictable, due to their interaction with the atmosphere resulting in the special pyrocumulus and pyrocumulonimbus cloud types. It is known that these make fires more extreme but the measureable relationship is still not defined.

First, Windsond was compared against Vaisala RS41-SG and found to correspond well. Then the authors launched 13 Windsond radiosondes in 7 wildfires during the 2021 fire season in the Iberian Peninsula. The extreme mobility of Windsond is useful in the dangerous and shifting conditions near wildfires.

The measured values differed from those suggested by prior theory, whichs shows the need for in situ measurements. From these and other measurements, they propose a classification of four types of fire-atmospheric interactions, with different effect on the fire spread. They also reached other insights in wildfire behavior.

The paper concludes that “This analysis shows the strong value of using in-fire-plume soundings to advance understanding of the coupling between upper air atmosphere and fire spread.”

The Center for Multiscale Applied Sensing (CMAS; https://www.bnl.gov/cmas/) launched 32 Windsonds simultaneously in downtown Houston in an attempt to gain further insights on the 3D structure of the urban heat island.

“Typically, we launch giant weather balloons in open fields to measure temperature and humidity up to 24 miles in the sky. There isn’t sufficient space in cities for the giant balloons to rise without hitting obstacles, and they may rise through navigable airspace and disturb flight traffic. Instead, we tried to use miniaturized instruments that can be lifted by party balloons that don’t fly as high as weather balloons but fly high enough to capture data in the region of the atmosphere that impacts people the most.”
– Katia Lamer, Director of operations and Assistant scientist, Center for Multiscale Applied Sensing

A University of Bristol team launched Windsond radiosondes at Volcán de Fuego in Guatemala this spring.

“We took Windsond radiosondes from Sparv Embedded with us on a recent overseas field trip and we were absolutely delighted with them. They were incredibly simple to use, very easy to deploy and supported by ground station software that did exactly what it was meant to. The staff were brilliant and turned around a last minute request from us in the days leading up to our deployment. Both the company and the hardware are thoroughly recommended. Many thanks to all at Sparv Embedded.” 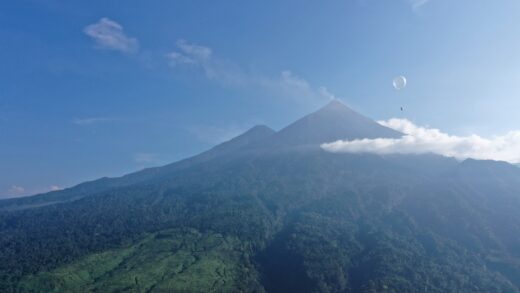 We’ll be on summer vacation July 2 – July 31. During this time, we can’t give you our usual, fast response time. Sending an email to both info@sparvembedded.com and anders@sparvembedded.com during this period will increase your chances to get hold of us.

Have a great summer!

Windsond is playing a big part in the NSF and NOAA supported project TORUS (Targeted Observations using Radar and UAVs in Supercells) in the US. The TORUS project aims at understanding the relationships between severe thunderstorms and tornado formation.

More information on the project is found at https://www.nssl.noaa.gov/projects/torus/

The manufacturer Anemoment LLC will shortly launch the TriSonica Sphere Wind Flux Sensor. This product was developed to address the growing demand for a compact, lightweight, 3D sonic anemometer that can accurately and precisely measure vertical wind velocity. Sparv Embedded is an approved distributor. Reach out to us if you are interested to order the sensor as is, or integrated with Sparv Embedded’s sensor system Sparvio.

The latest Windsond (version 2) software can be downloaded here: https://windsond.com/windsond_2.106_setup.exe. One bug was detected that could cause the program to slow down. This has been fixed and we suggest that you download the latest version. Please reach out to info@sparvembedded.com if you have any questions.

As usual, we will close the office a few weeks during the summer. We’ll be on summer vacation July 9 – August 9. During this time, we can’t give you our usual, fast response time. Sending an email to both info@sparvembedded.com and anders@sparvembedded.com during this period will increase your chances to get hold of us.

Have a great summer!

Sparv Embedded wishes you a very Merry Christmas and a Happy New Year!

The office will be closed December 23rd – January 3nd. Take care and be safe.

The video shows a severe weather research team in the US operating the two-balloon Windsond system “Swarmsonde” in heavy winds. As you can see, the sondes are launched directly from a car, illustrating the great portability of the small size Windsond system.

The research team’s ambition is to get close to, and in front of a tornado, in the inflow region, and launch Swarmsonde radiosondes. The team will get much closer to tornadoes than other groups in order to get measurements in the tornado at low altitudes. The sondes will become neutrally buoyant at about 100-200 m AGL and float toward the tornado vortex. Launching from a car this close to tornadoes is only made possible using the Windsond system due to the equipment’s advantageous and unique size.

How does Swarmsonde work?
When the sonde is released from the ground it is attached to two balloons instead of one. At a user-defined altitude, one balloon is automatically cut off from the sonde. The balloon that still is attached to the sonde makes it neutrally buoyant, giving measurements at the preferred altitude for a longer time.

We have made an executive summary on what measurement capabilities we offer today and the current TRL (technology readiness level) for each offering. See link below.

Let us know if you have any questions.