“Recovery rates of 90% can be expected”

The Windsond radiosondes are designed for reuse. While the small size makes for minimal environmental impact if not recovered and the sondes are affordable even as is, the easy and dependable recovery can make the price of each sounding marginal. Three factors helps the recovery: 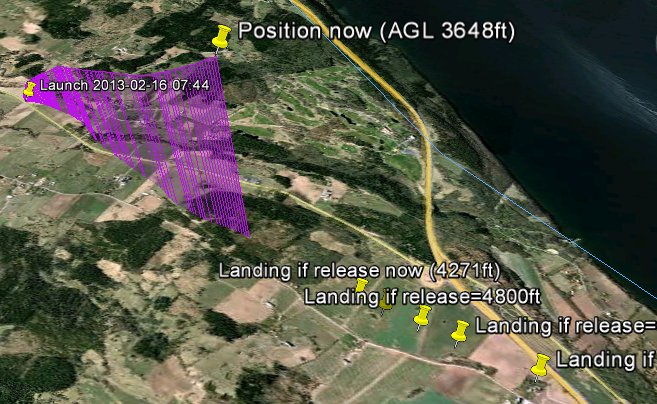 Specially developed algorithms lets the user choose landing site with about 50m accuracy. The sonde has the capability to do a controlled cut-down from the balloon based on altitude or at direct trigger from the ground station, transmitted via radio. A map shows predicted landing locations depending on the altitude where the sonde should let go from the balloon to fall back to earth. These locations form a line throughout the landscape where a landing is possible given the current wind conditions. The user can change the peak altitude at any time to make the sonde land in an easily accessible location.

The ground station updates the predicted landing location as the sonde falls, even if radio contact is lost. The final location is known with about 10 meters of uncertainty. The upcoming Android ground station shows the way to the sonde on a map and as a compass arrow.

The operator makes way to the landing site, where the sonde restores radio contact and starts to blink and beep. Even if landing in snow or rough terrain, finding the sonde is easy.

The power-save mode makes the sonde lay dormant for days before activated by the proximity of the ground station.

This short clip shows how easy the sonde is to spot even in fresh snow.