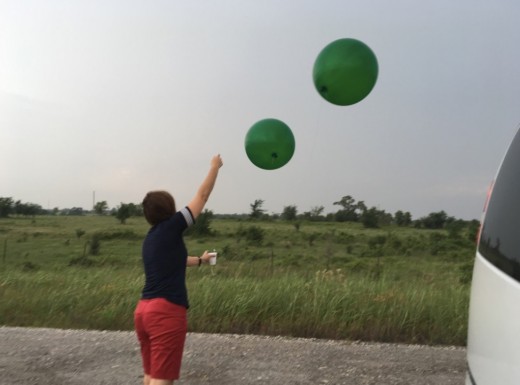 Swarmsonde is launched with two balloons (and two tethers). The sonde can then cut off one balloon from the sonde at a user-defined altitude. The balloon that still is attached to the sonde has enough helium to keep the sonde at the preferred altitude for a longer time, following the winds in a roughly Lagrangian trajectory.

Temperature, Humidity and Pressure in 3D

Swarmsonde was initially developed for operations in convective storms to map temperature, pressure and humidity in 3D. Read more about this in the below mentioned article:
Markowski, P.M.; Richardson, Y.P.; Richardson, S.J.; Peterson, A. Aboveground thermodynamic observations in convective storms from balloon borne probes acting as pseudo-Lagrangian drifters. Bull. Am. Meteorol. Soc.2018, 99, 711–724

Similar in operation to S1H3-R

Using the same hardware as Windsond S1, the product operates very similar to the regular reusable Windsond S1 radiosonde, except for the above mentioned unique Swarmsonde capacities.

For more information, read the Swarmsonde flyer (210 kB), check background information below or send your inquiry to info@sparvembedded.com

Radiosondes are traditionally attached to a helium balloon to ascend through the atmosphere until the expansion of the balloon makes it burst at around 30 km altitude. This yields a vertical measurement profile of temperature, humidity and winds. The profile is slanted from the drift due to wind. The sondes use GPS to derive winds from this horizontal movement. A pressure sensor can be included but is often not, since pressure can be calculated from the assumed hydrostatic equilibrium. In special cases other sensors are also attached, for example ozone or radiation.

Swarmsonde is an extension of this, where instead two smaller balloons are attached to each sonde. Once the sonde reaches a pre-programmed altitude, it lets go of one of the balloons. The remaining balloon makes the sonde roughly neutrally buoyant, making it float with the winds, approximating a Lagrangian trajectory. The sonde thus continues to sample at a low altitude for the entire measurement period of upwards an hour. When the operator releases multiple sondes in close succession, the returned data gives a glimpse of the three-dimensional distribution of temperature, humidity and winds.

This enables measurements that radars and lidars can’t do with good resolution and accuracy, for example mapping the atmospheric conditions that give rise to tornados. The only rival technique is a swarm of autonomous drones, an area that is still technically immature and held back by regulations.

The sonde is especially light-weight at 12 grams, making party-size balloons sufficient to lift it at a gentle pace. This enables a single van to drive around and release lots of sondes exactly where needed, something that would be impractical with the cubic-meter-sized balloons of regular radiosondes.

Like regular radiosondes, swarmsondes transmit their measurements to a ground station in real-time, instead of logging data for later offloading. The swarmsonde product shares a single radio frequency between up to 17 sondes by agreeing on which sonde may transmit at which time (the technical term is “time-division multiple access” or TDMA). An extension “multisonde” extends this to up to 128 sondes at the cost of lower sampling rate from each sonde.

As the radiosonde product Windsond which Swarmsonde is based on, the second balloon can also be jettisoned to make the sondes drop to the ground on command and be recovered for reuse.